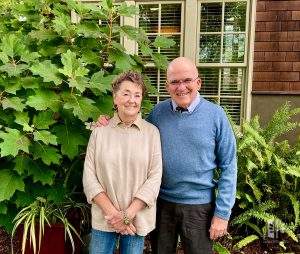 Jane and John Reed in front of their Los Altos home.

Not just a friend of the Los Altos History Museum, Jane Reed has been an inspiring leader, enthusiastic volunteer, and passionate, creative force in many ways for many years. Jane Reed received the 2020 Historic Preservation Award August 25, with a proclamation presented by Jan Pepper, Mayor of Los Altos, and on behalf of the entire Los Altos City Council. We at the Museum will be honoring Jane Reed with a special celebration on October 1. Stay tuned!

The Historic J. Gilbert Smith House opened in 1977 and Jane joined the Auxiliary in the 80s. In the late 90s, she joined Nan Geschke’s team to create a plan for the Permanent Exhibit in the new 8,000 square-foot Museum that was designed and being built. Dream big was the challenge, and they did. Jane helped select the exhibition designers and with the team created The Crown of the Peninsula: Uses of the Land over Time. The centerpiece was the family tree structure filled with shadow boxes. From her home workshop area, Jane’s artistic skills filled all the boxes with photos and artifacts to accompany the written stories on the new touch screens. The Museum opened in 2001.

Jane served on the Board of the Museum for two six-year terms, a record, from 2002-2008 and again from 2012-2018. She is a Past President of the Board. She helped manage many important fundraisers including the Annual Crab Feed, the recent Winchester/Merriman gala, and participated in all aspects of the organization’s events. Showing her interest and dedication in exhibitions, she went back to school in 2006-2008 to earn the MA Certificate in Museum Studies from JFK University.

Without a staff exhibition curator, Jane stepped into that role of Exhibition Committee Manager for 15 years and either curated or supported other curators in most of the three plus exhibitions per year. Some of these exhibitions include: Faces of Los Altos, photographs of locals out of the Museumarchives, Scenes from Above,local aerial photographs and maps, Spirits Return: Cultural Traditions Keeping Memories Alive, Over Here, a centennial observation of the US involvement in WWI, and Right Here, a follow up exhibit showcasing local war stories. Eichler Homes: Modernism for the Masseswas curated by Steven Eichler, with Jane’s management and leadership guidance, and indeed it brought masses of visitors to the Museum.

Another popular and award-winning exhibition was Shaped By Water, curated by Linda Gass and GreenTown Los Altos. Jane sought out Linda and partnered with her along the way. Nearly 9,000 people saw the exhibit when it was on view at the Museum. It then went on tour at History San Jose in 2013, with the expectation that 60,000 visitors would see it. It was a dream come true for those who created it.

With the able assistance of Jane, I curated another GreenTown Los Altos exhibit, Pedal Power: From Wacky to Workhorse. Jane always has good ideas, but in addition she will pitch in and get her hands dirty. She is not shy about picking up a paintbrush and helping out.

Jane appreciates the connection of art and history. When the idea of getting local artists involved with SFMOMA came up, Jane got the Museum and the Arts Commission involved. “We have no art museum in the city,” Jane said. “This is our contribution to the community’s focus on arts.” The show Moving Art Forward was a great success.

An art exhibition, Hearts Delight, showcased 50 juried pieces, including the work of the late Annie Knapp Fitz of Los Altos, a self-taught artist who had resided in the area since 1921. “If Annie was still with us, she might have entered her painting of the orchards at Buckeye Ranch in the 1920s,” said Jane, who curated the exhibit.

Other delightful art exhibitions have been By Hand:women’s quilts and needlecraft, Reflect + Create, Paint the Town II, April in Bloom, and Gallery 9.

And it was not just art that interested Jane; with early staff, she created The Melody Lingers On, celebrating music and theater groups in Los Altos. Visitors danced their way around a grand piano while listening to songs by Chris Isaak and Elvis Presley, and learned about Schola Cantorum, Music for Minors, the Bus Barn Stage Company, Ye Olde Towne Band and Main Street Singers.

Jane Reed loves our history, and IS part of our history. She was on the City Council for two full terms and Mayor twice, in 1982-83 and 1987-88. She took over as the first full-time executive director of the Los Altos Village Association in 1989. She serves with Friends of Historic Redwood Grove in the continuing effort to rescue and rehabilitate Halsey House, a landmark property. With the Los Altos Women’s Caucus, she has been involved with women’s civic engagement and the community education of local issues. She served for over 20 years on the Advisory Board for Pilgrim’s Haven, now The Terraces. With Los Altos Rotary, Jane participated in World Community Services and took several trips to the Yucatan peninsula in support of the Palo Alto NGO “Proyecto Itzaes” with its mission to foster childhood literacy and environmental education. As Mayor she helped start the Los Altos Sister Cities program in the 80s by traveling to Bendigo, Australia with her husband John to meet with city officials there.

Although she and John will be leaving Los Altos this fall and moving to Claremont, California, the city where she grew up, she will continue to help the Museum remotely, and they promise to return often.

Los Altos History Museum Executive Director, Elisabeth Ward, put it well when she wrote, “It was Jane’s leadership that led the Museum to embrace the idea that we are more than a historical association holding onto nostalgia for the past; she pushed the organization to see all the ways we could be addressing contemporary issues today and for the future by bringing to bear the perspective of the past.”

Thank you, Jane, for everything.

Contributed by Gary Hedden, Board President

A special tribute fund has been established in Jane’s honor. For details click here. 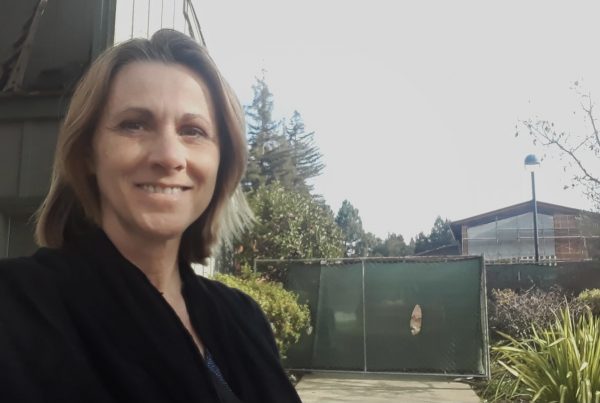 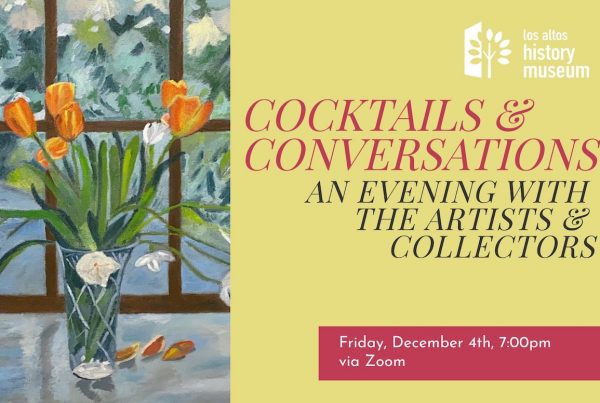 Art and the Gathering of Community 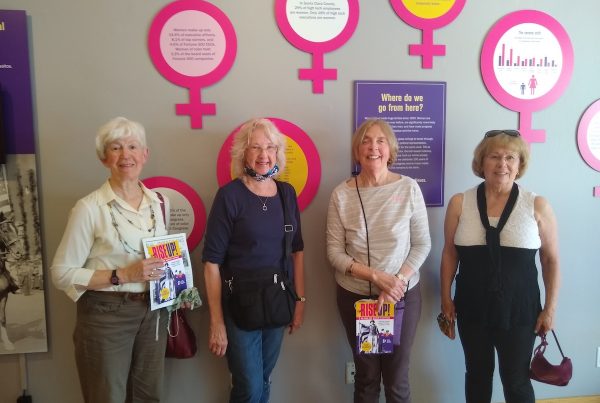 Kristen FullerNovember 9, 2020
Where the Past shapes the Future Plan Your Visit